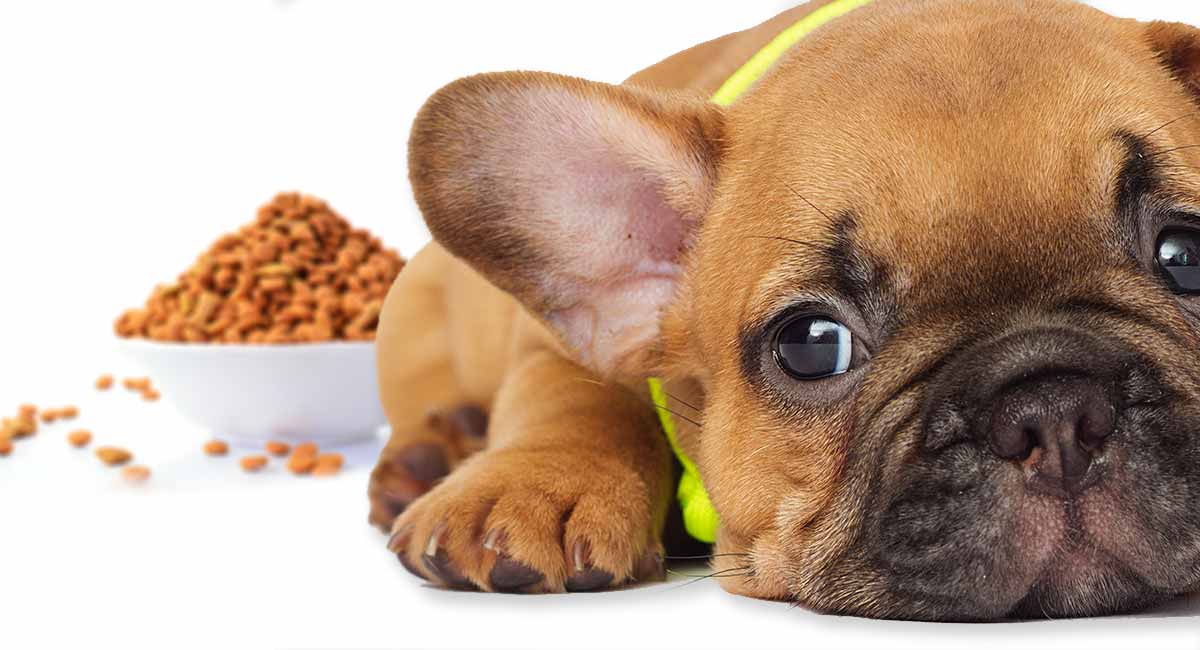 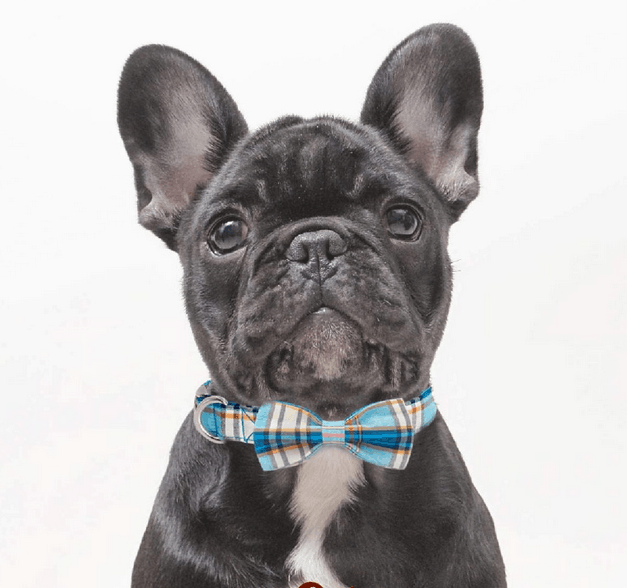 The ancestors of the French Bulldog were guard and fighting dogs which took part in bloody battles. Strong jaws, a threatening look, and a rebellious character are the main distinguishing features of the animal. Some time later, French breeders decided to slightly “transform” a stern pet. After a few years, decorative dogs began to appear and were called French Bulldogs. They were affectionate animals with large erect ears and attentive dark eyes. Another distinctive feature of the new breed was a varied coat color.

Even though historians are sure that the instigators of the breed were hunting and fighting dogs, no one can say for sure what specific species were the progenitors of bulldogs.

Because the forelegs of the animal are slightly shorter than the hind legs, the pet’s rear part is slightly raised.

Other shades of the animal coat aren’t considered to be a part of the breed standard.

The average lifespan of a strong and miniature dog is about 12 years. 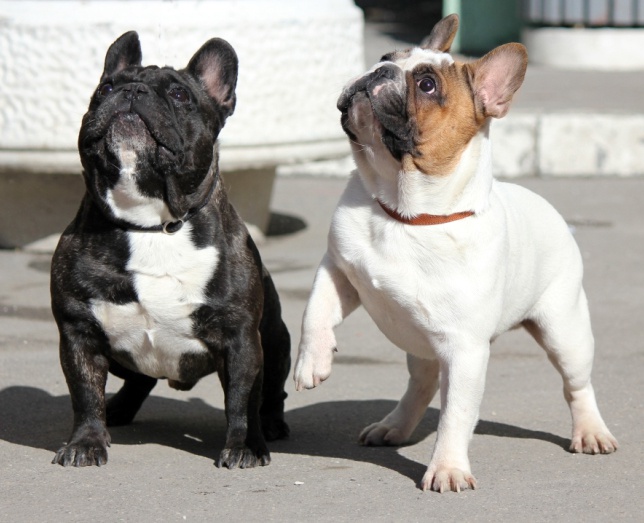 Nature of the French Bulldog

According to the majority, French Bulldogs resemble English bulldogs, which are their close relatives. However, this is a myth. In fact, the temperaments of both breeds differ a lot. The British are calm and restrained in everything. Frenchies, on the contrary, like to frolic and have fun. They are even called the best clowns among the four-legged friends of a human being.

French Bulldogs are very kind and affectionate dogs. They have no aggression whatsoever. Pets get along well with young children but at the same time, all bulldogs are very brave dogs. A decorative dog will be happy to fearlessly approach a large pet. As for cats, Frenchies chase them around just for fun. These dogs are not capable of harming them.

French Bulldogs respond well to training but at first, they perform tasks with a share of stubbornness.

If you learn to conduct training in the form of a fun game, pets will be happy to obey all your commands. The ardent temperament of the Frenchie can be “curbed” by accustoming him to overcoming the road with obstacles (agility). 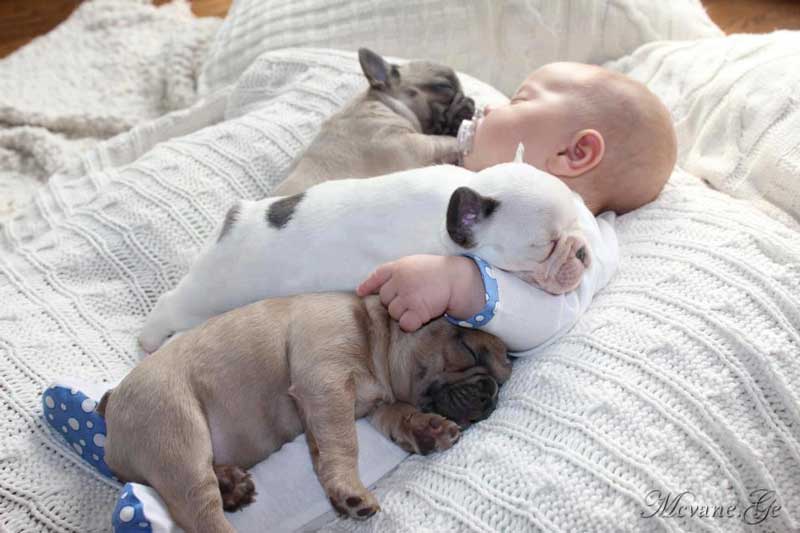 Even a child who is as young as 6-7 years old can parent and train a dog. Pretty much any new pet owner can toilet train a dog or teach him how to perform the most important commands, such as “Sit”, “Down”, “Heel”, and “Come”.

The French Bulldog can be easily trained at any age. If the dog has not been trained since the puppy period, you can still be sure that he will remember everything he needs to in adulthood.

To educate a pet, it is enough to voice it over to a dog when he misbehaves. For example, when he eats from the hands of other people, damages the furniture in the house, gets into bed, etc.

You can teach the animal to sit next to a small child so that in case of danger such as falling or unsafe movement, the pet could support the baby.

Do not allow dog walking to a child under 7 years old. A 14-pound pet is very strong and if he suddenly starts chasing a cat or a motorcycle, the child may not manage to stand still. 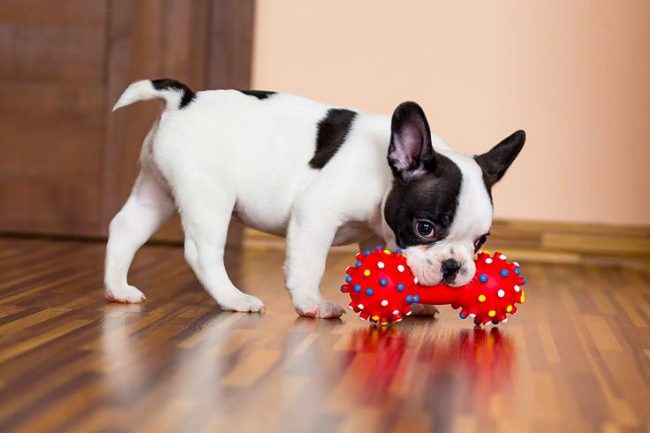 Caring for the French Bulldog

Do not overload French Bulldogs with physical activity. Due to the location of the sinuses, these pets have breathing problems. For this reason, dogs often sniffle and snore in their sleep. Therefore, if there is too much physical activity, it can be difficult for a pet to recover quickly enough.

In addition to this, Frenchies are prone to frequent colds but this is not only a matter of breathing difficulties. Short hair does not warm them when it is frosty. Therefore, you should think of purchasing winter outfits for your dog.

The Frenchie can easily injure his bulging eyes so extra care must be taken. For prevention purposes, do not allow your pet to run in tall grass or through bushes. It is important to remember that French Bulldogs cannot swim. A large dog’s head will immediately get pulled to the bottom, if the dog ends up in any sort of body of water.

Yet, home bathing should take place regularly for hygiene purposes. It is recommended to perform the procedure at least once every 4 weeks.

The dog should not overeat because he can gain weight and as a result, he will have problems with health.

Other than that, the bulldog will not cause much trouble when taking care of him. You can safely take your pet with you when traveling. You may also use public transport with your dog after putting him in the bag. The French Bulldog quickly gets used to the change of scenery and enjoys any place as long as their beloved owner is nearby. 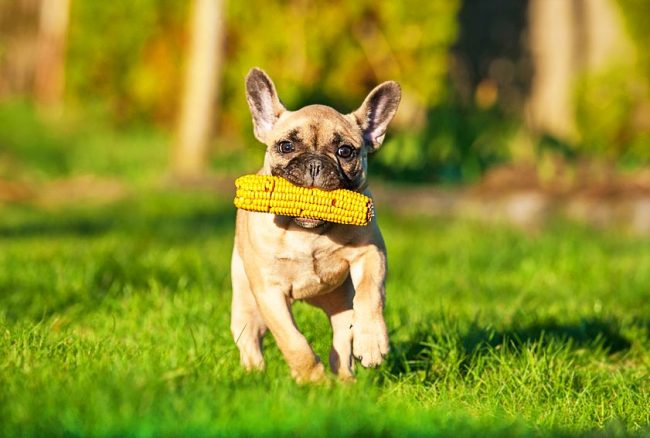 4-month-old puppies can eat whatever is fed to the bitch. Solid food for puppies needs to be pre-moistened by adding some warm drinking water. The soft mass will not disrupt the metabolic processes in the pup’s body. Gradually, the amount of water in the food is reduced and at some point, you may stop adding it completely. It is strictly forbidden to add cow’s milk to the pet food because puppies will have diarrhea as a result of its consumption.

In addition to the usual pet food, adult animals can be fed low-fat meat such as beef, veal, turkey, and chicken. It is allowed to feed a dog with cottage cheese, yogurt, rice, vegetables, and buckwheat porridge. To avoid obesity, you should not give dogs fried, starchy, salty, and sweet products. 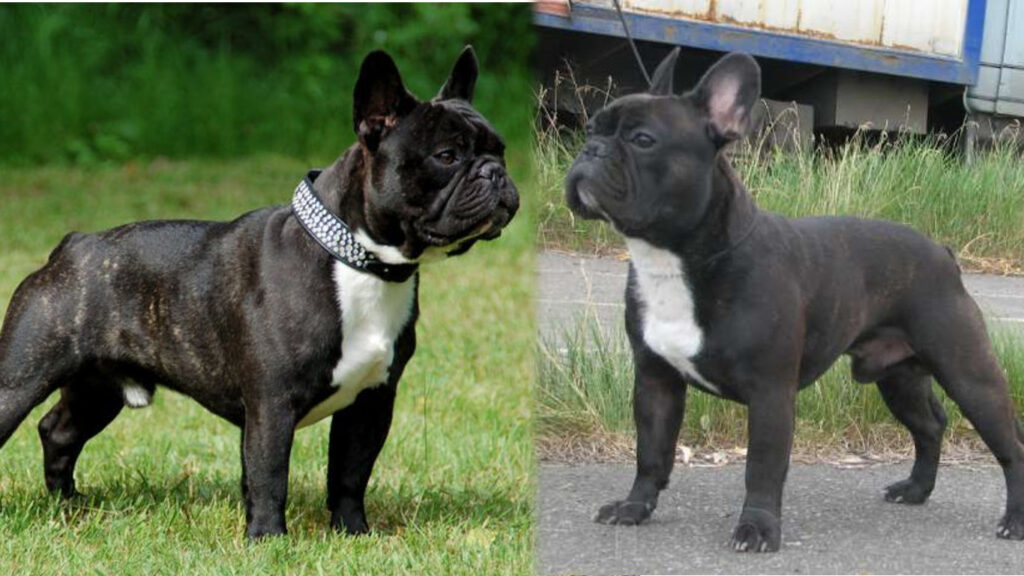 Diseases of the French Bulldog

French Bulldogs do not tolerate heat very well. If in the summer you leave your dog in a car with a closed window or on the beach under the scorching sun, you have to understand that you will sign him a sentence. Heatstroke is considered to be one of the most common illnesses of these pets.

In addition to this, four-legged Frenchies are subject to the following illnesses:

What’s even more dangerous for these pets is a pathology associated with breathing. As mentioned above, due to the distinctive structure of the dog’s sinuses, it is not always easy to breathe. It is normal if a bulldog snores sometimes in a dream, sniffles after long walks, and breathes quietly when he is calm.

If the problem is significant, the dog may develop brachycephalic breathing. The disease manifests itself in the constant snoring, which worsens in the heat or when the dog suffers from obesity. If the disease is not treated, the pathology can be fatal.

French Bulldogs are very cute and kind decorative animals. The breed is suitable for all pet owners since the dogs are obedient and completely devoid of aggression. Also, these pets have a brave heart and a cheerful character.

Before you get such a dog, it’s worth remembering some important rules. French Bulldogs can’t swim because in the water their heavy head goes down immediately. Breathing problems make the dog intolerable to the heat and intense physical activity.

The French Bulldog will be a great loyal friend to any owner. Besides, he will perfectly cope with the role of a nanny for the children.